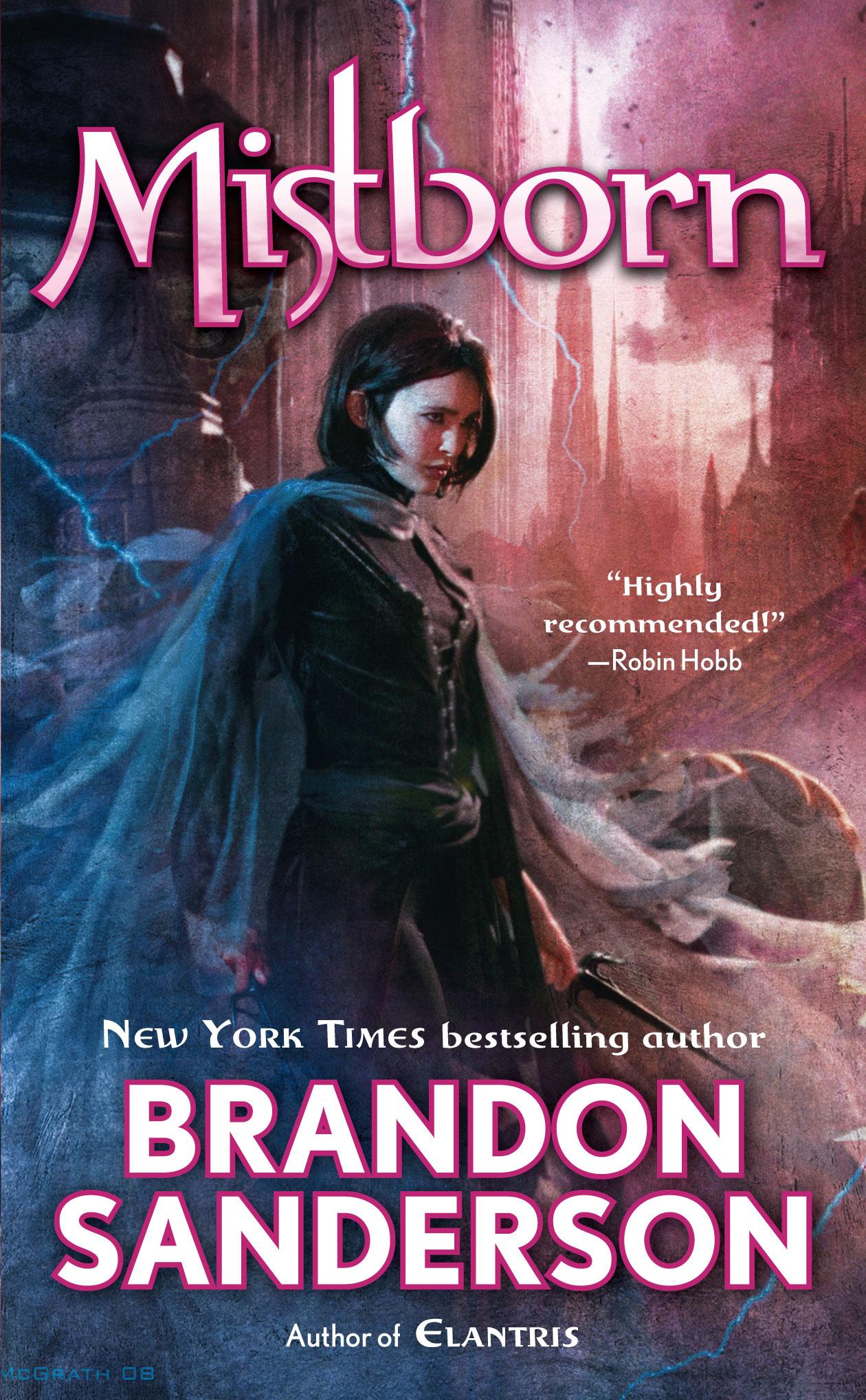 In a world where ash falls instead of rain, and the realm of night is taken over by mist, Vin struggles to survive as a thief before the charismatic Kelsier picks her up and changes her life. He frees her from being a common thief, and has her join his crew of more-than-interesting fellows as they’re plotting to overthrow the Final Empire. Has life become better for her or worse as she becomes involved with this daring plan?

When I began reading, the prologue and first chapter bits had me puzzled and reading off and on. But I’m so glad I kept with it, because the story grew on me after just a few more chapters! Vin is the main protagonist, and she starts out as an overly cautious, quiet, constantly-on-the-alert female thief, who’s stuck serving a thief crew of the worst kind. I think that’s what put me off, at first. But things change when the mysterious Kelsier discovers her and the secret power she wields. Vin is unaware of who or what she is, but Kelsier senses her potential, and works to free her from that villainous crew.

Vin was a very interesting character to follow. You can see every step as she changes and grows as a person throughout the time the book covers. There’s even a point where she must leave her boy trousers and grimy look behind to fake playing the role of an aristocrat—the polar opposite of what she’d been before! (I think some of my favorite chapters happened during that time) Though most fun of all was watching her train how to use her Mistborn power. She’s one of the most likeable protagonists I’ve come across in a long while. She’s not tough, but she works hard, never stops trying her best, and has a dangerous sense of curiosity (Curiosity killed the cat, Vin! Can’t you be more cautious at times?!).

The Mistborn power is a unique one! Only a select people with special blood can become Mistborns. They swallow vials containing metals, which they then burn inside their stomach to heighten senses, increase strength to superhuman levels, and much more. They can even Push or Pull against metals to leap so high that they practically fly! This power is a lot more complicated and has a series of rules, but I’ll let you read the book to explore it more. It’s really cool, and very well thought out!

Kelsier is quite the character! I’m not even sure how to accurately explain him! He’s cheerful in the face of danger, a people person, likable to a fault, enjoys attention, quite a show-off, yet has a genuine and sweet side you can’t help but love. When something goes wrong he doesn’t let it get him down, but instead comes up with new plans to make things work out. In a way, you could compare Kelsier to Robin Hood, and his crew of talented fellows to the Merry Men, in their desire to overthrow the evil ruling power and its greedy aristocrats. Each crew member has a special talent with different metals, allowing each of them different powers that as a group they can use to carry out impossible plans. Most of those plans had been big thieving jobs, disrupting the corrupt aristocratic system, up until now, that is. Kelsier has bigger plans for his crew and for Vin, the ultimate plan of all: overthrowing the Empire, which has reigned for a thousand years!

This plan of Kelsier’s was cleverly crafted and felt very real. It’s a plan that takes them a long, realistic time-frame to prepare for. You know how some stories will quick tell you their great plan, and then rush to make it happen, and you’re like “Is that even realistic? Shouldn’t it take months, even years to prepare for?” Well, Sanderson did a great job with how his characters go about organizing and preparing for their plan, which for me added more depth to the story and let me feel like I was there going through it with the characters. I could feel their hard work, their concerns and anxieties, and the magnitude of what was at stake.

The story keeps you guessing with twists and turns, and is a pleasant combination of action and calm touching scenes. During the action sections you are kept on your toes, wondering who will survive. Enemy Mistborn are not the only things Kelsier and Vin have to worry about: there are creatures once human called Inquisitors that are insanely powerful, and worst of all, impossible to kill… Not to mention the immortal Emperor himself. The outcome of all of this is one of the best, most heart-wrenching endings ever! So have a pillow or something with you to hug as you read!

I could go on and on. There is so much of the story that I haven’t even touched on here! A must read for anyone who loves quality action, mystery, and suspense, with a great cast of characters you will not soon forget. If you are squeamish, there are several gruesome scenes (aftermath of killings), but otherwise it’s a great read.

10 thoughts on “Mistborn, The Final Empire #book by #BrandonSanderson”